Thanks to Timo Reimann, Bjoern Brundert and Tom Schwaller for their feedback and improving this post.

During a recent customer engagement, a discussion about Kubernetes NodeSelectors came up. There was some confusion about whether and how to use them for a multi-tenant cluster deployment. In the end, we decided to leverage the Kubernetes PodNodeSelector admission controller. Since not all implementation details were clear to me, I did some experiments and wanted to share my findings with you.

Using NodeSelectors in Kubernetes is a common practice to influence scheduling decisions, which determine on which node (or group of nodes) a pod should be run. NodeSelectors are based on key-value pairs as labels. Common use cases include:

You can read more about NodeSelectors and other options in Assigning Pods to Nodes.

Given these use cases are often requirements in enterprises, this topic comes up in almost every architecture workshop or design review I conduct with customers deploying Kubernetes on VMware vSphere. VMware vSphere VMs can be of any size and may have different quality of service (QoS) policies, for example resource guarantees or limits (cpu, memory, disk, network) applied.

Just like with Kubernetes resource management, it is a service level agreement (SLA) and contract the infrastructure provider agrees to with the consumer. Thus NodeSelectors play a critical role to ensure that, for example, production workloads (Kubernetes deployments, or pods to be precise) run on VMs with QoS == “production”. Otherwise we would be at risk breaking the contract. As a best practice, NodeSelectors are typically set during CI/CD pipeline stages without human intervention.

You might be wondering why I am not discussing related concepts, like node (anti-) affinity or taints and tolerations. Please see the section “Roadmap and alternative Approaches” at the end of this post.

Quoting from the Kubernetes documentation:

An admission controller is a piece of code that intercepts requests to the Kubernetes API server prior to persistence of the object, but after the request is authenticated and authorized. The controllers […] are compiled into the kube-apiserver binary, and may only be configured by the cluster administrator. […] If any of the controllers in either phase reject the request, the entire request is rejected immediately and an error is returned to the end-user.

There are many admission controllers in the Kubernetes core, for example LimitRanger or PodPreset. A complete list is provided here.

The Use Case for PodNodeSelector

The PodNodeSelector admission controller has been in the source for a while, based on an upstream contribution from Red Hat (Openshift’s project node selectors). Quoting again from the Kubernetes documentation:

This admission controller defaults and limits what node selectors may be used within a namespace by reading a namespace annotation and a global configuration.

Ok, so why would I use that one instead of simply specifying NodeSelectors in the pod manifest? Well, using this admission controller has some advantages:

The last one is very important if you have large distributed teams or different departments within the organization. I have seen customer environments, where there was no communication between infrastructure operations, the Kubernetes platform engineers and the development teams. The lack of alignment led to performance issues and, sometimes even worse, production outages. Simply speaking, every team had a different understanding and definition of “production”.

Translated into an enterprise deployment, the following (highly abstracted) picture tries to make it clear. Here, a kubectl user is only allowed to deploy nginx pods into the namespace “development”, enforced by Kubernetes role-based access controls (RBAC). However, if she doesn’t specify a NodeSelector, this pod could end up being scheduled on the production VMs. The PodNodeSelector automatically injects a NodeSelector, based on a default policy.

On the other side, the CI/CD pipeline has a workflow defined to deploy mission-critical nginx proxies into the namespace “production”. Those should always land on a production VM, because these have a higher QoS policy applied by the VMware vSphere cluster administrator (remember the “contract” we spoke about earlier?). 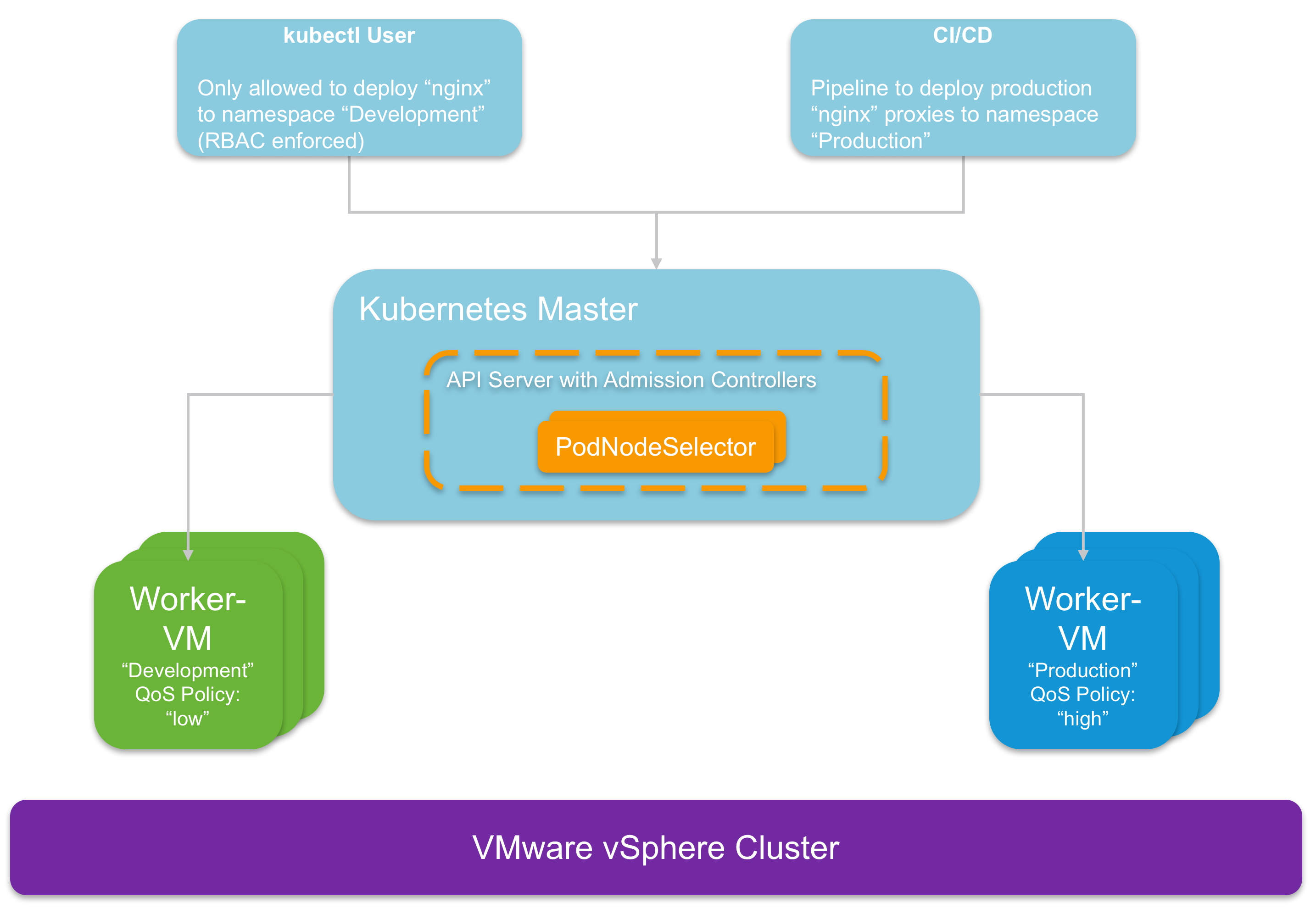 I am working on a follow-up article describing distributed resource management and QoS in the enterprise. A fascinating topic if you ask me :)

But using admission controllers, in their current implementation, can also have downsides, most notably:

This is why Dynamic Admission Control has been added to Kubernetes recently.

Back to our admission controller. Now that we understand the pros and cons, let’s deploy it and see it in action.

My demo environment is based on a three node kubeadm deployment, running in VMware Fusion:

To better understand the examples, let me first explain some terminology used in the PodNodeSelector:

Assuming your cluster has been deployed with kubeadm, the kube-apiserver.yaml file is the configuration manifest for the Kubernetes API server. It is located in /etc/kubernetes/manifests. Add the PodNodeSelector admission controller in the --admission-control= flag.

Strictly speaking, the plugin order matters. We will ignore this in our demo example. You can read more about it in Using Admission Controllers.

Also add --admission-control-config-file, volumeMounts and volumes sections as depicted below. They relate to the default selectors and whitelist, which we will create in a second.

This file defines the default NodeSelector for the cluster, as well as whitelist for each namespace. Note the following:

For whitelists to work, every namespace has to have a matching annotation (this is not a label!). “noannotation” shows what happens when there is no (matching) annotation.

Apply labels to the nodes, matching the whitelist NodeSelectors above.

If you also wonder about the alpha in the annotations spec, there is an issue discussing it.

What Kubernetes created for us:

But where’s the nginx pod from the “noannotation” deployment? Let’s ask Kubernetes:

As you can see, no pod is being created due to the admission controller. We intentionally triggered this since we did not specify a correct namespace annotation matching the whitelist (as we did with the “production” namespace).

Deploy a Pod with a conflicting NodeSelector

Now let’s try to create a pod in the “production” namespace, but specify a conflicting NodeSelector in the pod manifest. This could happen for various reasons: A typo, a greedy user, not cleaning up pod manifests after changing labels, etc.

This is nice. The admission controller checks for conflicts. And since the “nginx2” pod is supposed to be deployed in the “production” namespace, we only allow label selectors listed in the whitespace section of admission-control.yaml.

To keep things simple and understandable, I usually follow these best practices when using this admission controller:

You might be wondering why I am not touching on node (anti-) affinity, external admission webhooks or taints and tolerations. The latter would be appropriate as well, but one would have to write a custom admission controller.

node (anti-) affinity (currently in beta) is supposed to become the successor of NodeSelectors, with richer query logic. When they graduate from beta to stable, NodeSelectors eventually will be deprecated.

For external admission webhooks, as part of dynamic admission control, it’s still early days and for some simple use cases they might be overkill. But this is just my opinion at the time of writing this article. Kubernetes is moving fast and the amazing community quickly resolving gaps and issues.

So why would you use PodNodeSelector admission controller today? Here’s my point of view:

Thanks for taking the time to read this post. I hope you found it interesting and it at least answered some questions. As always, feel free to share it on social media and reach out to me on Twitter for any feedback, comments or corrections.

Inside Docker's "FROM scratch"